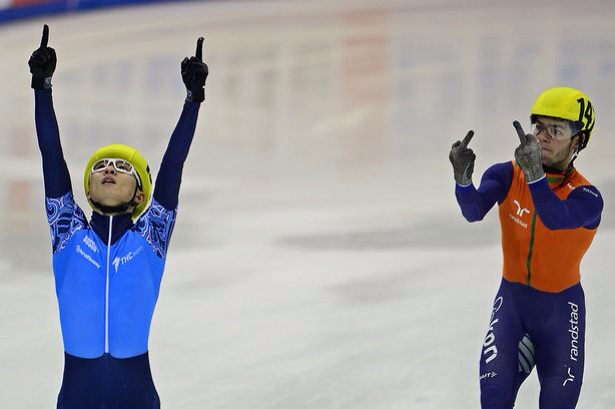 It’s not a common occurrence for me to take notice of Speed (ice) Skating but when the Winter Olympics come by every four years I seem to enjoy it, especially when there’s controversy. Don’t we all?

Most sports fan, and those who indulge in the Olympic spirit, don’t just enjoy the Olympics as a sporting spectacle but also anticipate a level of abnormality in an event.

Moments that go down in sporting and Olympic history like the sportsmanship of Canadian sailor Lawrence Lemieux at the 1988 Seoul Summer Games – sacrificing his position to save Singaporean sailors Joseph Chan and Shaw Her Siew who capsised their boat (Lemieux was credited with a second place finish in that race en route to finishing 11th overall).

He would also be awarded a Pierre de Coubertin medal by then-IOC President Juan Antonio Samaranch.

The 1968 Olympics Black Power salute was another moment in history with an act of protest by the African-American athletes Tommie Smith and John Carlos during their medal ceremony in Mexico City.

As they turned to face their flags and hear the American national anthem they each raised a black-gloved fist and kept them raised until the anthem had finished.

In his autobiography, Silent Gesture, Tommie Smith stated that the gesture was not a “Black Power” salute, but a “human rights salute”. The event is regarded as one of the most overtly political statements in the history of the modern Olympic Games. 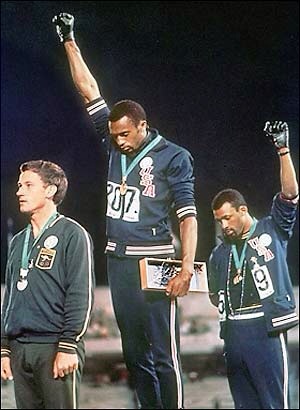 One that comes to mind for Australians, and refers to the subject at hand, is the Gold Medal winning ‘performance’ by Steven Bradbury in the 2002 Winter Games in Salt Lake City. I highlight the word ‘performance’ as his efforts were somewhat lacking but he admitted that was his actual game-plan.

After qualifying for the 1000m speed skating quarter-finals Bradbury literally took a backseat to the Gold medal.

He progressed through the quarters via an opponents disqualification to be given no chance of making it any further.

Bradbury was happy to sit behind defending champion Kim Dong-Sung of South Korea, multiple Olympic medallist Li Jiajun of China and Mathieu Turcotte of Canada hoping they would crash. And crash they did, paving the way for the Australian to take second place and allowing him through to the final.

Entering the last turn of the Final, Bradbury was trailing skaters Ohno, Ahn Hyun-Soo, Li and Turcotte (who were on another level) as part of his plan ‘wait and see what happens’.

Again, his plan was successful! All skaters crashed out on the final turn and Bradbury, who was coasting 15m behind the pack, strolled over and took Gold for Australia.

After unsuccessful protests from fellow competitors and the demand of a re-race, Bradbury became the first person from any southern hemisphere country to win a Winter Olympic event.

With the Sochi Winter Olympics a matter of days away it seems the Speed Skaters are flaring controversy again (which I’m excited about), this time at the European Championship in Dresden.

Knegt immediately reacted to the loss by raising both his middle fingers in an obscene gesture towards Ahn. Unsurprisingly, this led to his disqualification.

Knegt also kicked out in Ahn’s direction in such a terrible display of unsportsmanlike conduct, although he was far enough away that he was no chance of connecting the attempt was worse enough.

The European Championship represents the final major tournament before next month’s Winter Games . Both Knegt and Ahn will compete in the short track speed skating and I for one will be keeping a close one on this event when it commences February 10 in Russia.